10 Best Things to Do on a Perth to Broome Road Trip, WA

Driving the length of Western Australia's western coastline is a colossal undertaking, but one that comes with rich rewards. Get inspired by this checklist of top things to do on a road trip from Perth to Broome.
Adam Ford
Australia, Broome, Geraldton, Karratha, Perth, Western Australia

A road trip up or down Western Australia’s western coastline can best be described as ‘epic’.

Unlike the heavily populated east coast, in this neck of the Aussie woods you often feel like you have the whole place to yourself. Beaches of the bluest water and whitest sand, rugged landscapes that feel as old as time itself, fabulous wildlife viewing opportunities in and out of the water, a rich Indigenous culture to explore, characterful towns and calming coastal hamlets, and an all-encompassing sense of adventure are the hallmarks of a roadie from Perth to Broome (and vice versa).

If it’s your first visit to Perth, you’ll want to spend at least a couple of days enjoying everything the Western Australian capital has to offer. Don’t miss seeing the newly opened, architecturally stunning WA Museum Boola Bardip. Meaning ‘many stories’ in the Noongar First People’s language, the museum well and truly lives up to its name.

Two thousand kilometres north (as the crow flies), a visit to Broome comes with a disclaimer; be aware that this town can cast a spell over the most confirmed of city slickers, and you may well find yourself seriously considering a sea change. Special mention to Cable Beach Club Resort and Spa — one of Western Australia’s best hotels. Situated on Broome’s iconic Cable Beach, and with a Zen feel, beautifully appointed rooms, two large pools, a tranquil spa, and a wide range of dining options, you may never want to leave!

How long will this trip take you? Well, you’ll need a minimum of ten days to see and do everything on this list, but that will mean setting a cracking pace. Two or three weeks will give you time to idle in some of the incredibly beautiful spots along the way. And if you have a spare month or two, that’s even better!

Here are ten of the best things to do on a Perth to Broome road trip.

Driving the length of Western Australia’s western coastline is a colossal undertaking, but one that comes with rich rewards. Get inspired by this checklist of top things to do on a road trip from Perth to Broome.

Boola Bardip isn’t the only recent addition to Perth’s already long list of attractions; the wave-like Matagarup Bridge was constructed back in 2018, and now offers a bridge climb experience high above the Swan River. Connecting East Perth and Perth Stadium, the pedestrian suspension bridge is a heady 72 metres in height and requires a climb of 314 steps to reach the Sky Deck viewing platform just under the peak. Avoid the walk down by hitching a ride on the soon-to-open 75-kilometre-per-hour zipline!

Ooh, those cute quokkas with their button noses and cheesy grins (OK, we all know they’re Photoshopped, but hey, who wouldn’t be happy living on gorgeous ‘Rotto’?). Take this opportunity to head over to Rottnest Island from Perth and snap a selfie with one of the resident rock star marsupials. The island is a 90-minute ferry ride from Perth’s CBD, or 45 minutes from Hillarys Boat Harbour on the coast. While you’re there, put a smile on your own dial by diving into a famous jam and custard donut from the Rottnest Bakery.

A 2.5-hour drive north from Perth will bring you to Nambung National Park and the second of many memorable selfie moments on this trip. Reminiscent of the sets from the original Lost in Space TV series, the lunar-like Pinnacles Desert consists of a sandy landscape punctuated by limestone pillars of varying heights. The desert is at its most photogenic at sunrise, or against a clear blue sky as the sun drops and the pillars cast lengthy shadows over the golden sand.

If you’ve worked up an appetite moonwalking, head to the Lobster Shack at nearby Cervantes for a fish feed. This town marks the southern extremity of the Coral Coral, which stretches for 1,100 kilometres to Exmouth.

4. Visit the Abrolhos Islands from Geraldton

Head north for another 2.5 hours (making a pitstop in beautiful Jurien Bay if you have the time) to the bustling Mid West coastal hub of Geraldton. ‘Gero’ is the gateway to the Houtman Abrolhos Islands — possibly one of Australia’s best kept natural secrets. Situated 60-or-so kilometres off the mainland coast, the 120+ coral islands and cays are rich in biodiversity and home to all manner of sea and land-dwelling critters. There are a variety of ways to experience the beauty of the islands. Geraldton Air Charter offers a combined air and ground experience, which includes the chance to snorkel off East Wallabi Island and fly over the site of the infamous 1649 Batavia shipwreck.

5. Admire the view from Nature’s Window at Kalbarri

Nature’s Window is undoubtedly the most visited and photographed natural landmark in Kalbarri National Park — just under two hours’ drive north of Geraldton. The rock window of layered sandstone is an 800-metre walk from the carpark and frames the Murchison River as it winds its way through the arid landscape. Just a few minutes’ drive from there, the Kalbarri Skywalk is made up of two elevated platforms that jut out over the deep river gorge and provide yet more scenic vistas.

6. Mingle with the Monkey Mia dolphins

Families and nature lovers alike shouldn’t miss a visit to the small town of Monkey Mia in the Shark Bay region — the westernmost part of the Australian mainland. Bottlenose dolphins swim in close to the shoreline most mornings to collect a breakfast of fresh fish from a WA Parks and Wildlife Service ranger and some lucky volunteers. While it attracts thousands of eager onlookers each year, the interaction is governed by strict rules and the dolphins largely call the shots. They’re not the only marine life you’ll see in these waters; sharks, rays and turtles can all be spotted from the elevated boardwalk at Eagle Bluff Lookout.

7. Kick back in Coral Bay

Further along the Coral Coast, the tiny township of Coral Bay is the perfect spot to stop and catch a well-earned breath roughly halfway through this adventure. Cupped around Bill’s Bay, the town’s beaches offer direct access to the fringing Ningaloo Reef (part of the 260-kilometre-long World Heritage-listed Ningaloo Marine Park). Pop on your snorkel and flippers to spot countless fish species, baby reef sharks, and even sea turtles.

Despite its growing popularity, Coral Bay has somehow managed to keep over-development at bay and maintain a delightfully low-key feel (the permanent population numbers in the low hundreds). Book a villa at the Bayview Coral Bay Holiday Park and enjoy a blissful outlook over the water.

8. Swim with whale sharks in Ningaloo

Migrating whale sharks make the Ningaloo Marine Park their home for several months of the year, and it’s possible to have a close encounter with these gentle giants — the largest fish on the planet — on a whale swim. Exmouth-based Ningaloo Whale Shark Swim expedites search time using their own spotter plane, leaving you more time in the water to admire these incredible animals.

9. Fly over the Dampier Archipelago from Karratha

Speaking of planes, there’s no doubt that seeing Western Australia’s vast North West region from the air is a sublime experience, particularly when you get to take in the beauty of the Dampier Archipelago. Situated north-west of Karratha (five hours’ drive from Exmouth), the archipelago is made up of 42 islands, 25 of which are designated nature reserves. Heli Spirit offers a 45-minute scenic flight from Karratha over the islands, and you may spot manta rays, dugongs, dolphins, and even whales. The contrast of red rock, white sand and azure water is one of nature’s simplest but most striking colour palettes.

Back on terra firma, Karratha also offers access to some truly magnificent outback landscapes. Drink in the parched beauty of Karijini National Park, or camp under the brightest of stars in Millstream Chichester National Park.

It’s a marathon eight hour-run from Karratha to Broome, and it seems fitting to wrap up this roadie on spectacular Cable Beach as the sun slides slowly into the shimmering Indian Ocean. Cable Beach Club’s Sunset Bar and Grill is one place to enjoy golden hour, as is the back of a camel on a sunset tour with award-winning Red Sun Camels. The ships of the desert have a long history in the Kimberley, and the rhythmic rocking of these dromedaries plodding along the sand has an almost hypnotic quality. Bring your camera; you’ll get great shots of the setting sun from atop your humpy steed.

Do you have any suggestions to add to our list of the best things to do on a Perth to Broome road trip? We would love to hear from you. Please leave a comment below.

Travelling through remote parts of Western Australia is an amazing experience, but it requires careful planning and preparation. Make sure you seek the advice of the relevant local authorities when arranging your trip. 10 Best Things to Do in South West WA: Perth to Albany Road Trip 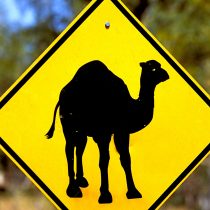