Traveller’s tale: Things to Do on a Visit to Sigiriya, Sri Lanka

The Sigiriya archeological site in central Sri Lanka dates back to the 5th century AD and is one of the world's most amazing examples of early urban planning. A visit to Sigiriya is an opportunity to follow in the footsteps of ancient royalty.
Marianne Diaz
Asia, Sigiriya, Sri Lanka
Browse tours and experiences

When Kasyapa overthrew his father, the king of Sri Lanka, in the 5th century AD and had him entombed alive, he understandably became a little nervous about his own safety.

He was so concerned about his vengeful brother that he decided to move his newly acquired court to the middle of the country, to rule from the top of a volcanic rock 370 metres above sea level. The palace was known as Sigiriya (meaning ‘Lion’s Rock’).

Today Sigiriya is one of Sri Lanka’s most popular tourist sites. It’s referred to by Sri Lankans as the ‘eighth wonder of the world, and was declared a World Heritage-listed site by UNESCO back in 1982. I’m about to find out why.

Sigiriya is located four hour’s drive northeast of the Sri Lankan capital Colombo. Before attempting the climb to the top of Lion’s Rock, we stroll through the extensive palace gardens — possibly the oldest landscaped gardens in the world.

We follow the central gravel path that meanders towards the Rock. The left side of the gardens features simple grassy slopes and trees whereas the right side consists of stone walls meticulously excavated, exposing ancient ponds and gravity-fed fountains that, incredibly, still work in the wet season. For hydraulics built 1600 years ago, the complexity is amazing.

Passing the many pools King Kasyapa had constructed for himself and his 500 wives, we reach the base of the Rock and begin the climb. For a small fee, the Sigiriya complex provides a personal guide for the climb — as well as child-carriers who literally carry your children up to the top for you. They seem to do it effortlessly too!

After giving up on counting the steps at around 450, I’m sweating profusely but totally in awe of how an ancient civilisation built an entire citadel on top of this rock all those centuries ago.

We reach Sigiriya’s ‘mirror wall’. It’s believed this wall was kept polished so that King Kasyapa could see his reflection in it. Today it bears graffiti dating from the 8th century, made up of intriguing inscriptions and poems.

Also intriguing are the frescoes that remain on the western side of Sigiriya. This side of the rock was almost entirely covered by frescoes and I can’t help but wonder how they managed to paint them so high up. No doubt the death toll was high. Unfortunately most of the frescoes were removed by the monks who were gifted Sigiriya after King Kasyapa was killed. Yes, you guessed it. He was killed by his brother Moggallana — the rightful heir to the throne.

We approach the entrance to the palace complex and immediately understand why it was named Lion’s Rock. The entrance once featured an enormous lion carved into the rock. Most of it has been destroyed, however the two clawed paws remain and climbing up the steps between them feels surreal.

Reaching the peak of the Rock, I place my foot onto the top step (number 1,250 I believe). This is where the palace entrance once stood. The view across the surrounding jungle is vast and I can understand why Kasyapa thought that living up here would be ideal. The bathing pools surrounding the palace would have accentuated the feeling of living in a paradise.

The palace was eventually destroyed by King Moggallana and Lion’s Rock was used as a Buddhist monastery until the 14th century. Abandoned for the next 300 years, the ruins were rediscovered in 1831. Full excavations only began in the 1980s, and they continue today. I marvel at what this extraordinary trove of Sri Lankan history has revealed so far.

Do you have any tips for things to do on a visit to Sigiriya? We would love to hear from you. Please leave a comment below. 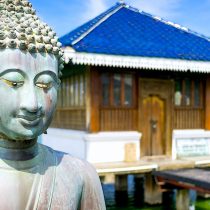 10 Top Things to Do in India's Golden Triangle