Top 10 Things to Do in Broken Hill, NSW

Broken Hill is one of Australia's most famous outback centres, and one that offers an amazing array of cultural and historical experiences. Tick off these ten top things to see and do.
Dixie Lamers
Australia, Broken Hill, New South Wales
Browse tours and experiences

If you’re up for a bit of poetic exaggeration, Broken Hill feels like it’s a million miles from anywhere.

Broken Hill was founded in the 1880s and is best known for its mining heritage, which began with the unearthing of the Line of Lode — one of the world’s largest ore seams of silver, lead, and zinc. It earned the far-flung outpost the nickname ‘Silver City’ and has been continuously mined for the past 130 years. The seam’s discovery led to the formation of Broken Hill Proprietary — now known as BHP — one of Australia’s most iconic companies.

The wealth yielded by the stony ground gave rise to what is now a breathtaking cache of fine period architecture, and in 2015 Broken Hill was the first (and to date, only) Australian town to be added — in its entirety — to the National Heritage List. It’s also, understandably, a trove of mining history.

Here are ten of the best things to do in Broken Hill.

Watch our video of ten top things to do in Broken Hill:

10 Amazing Things do Do in Broken Hill, NSW | Travel Guide

★ Hit SUBSCRIBE for more amazing travel ideas! ★Welcome to Top Oz Tours’ (formerly The Big Bus) YouTube Channel. In this video, we take you to the fabulous o…

One of Broken Hill’s most distinctive features is the vast ‘mullock heap’ (pile of waste mining rock) that cuts the city in two. Some might call it ugly; others, starkly beautiful. Positioned on top of the heap, the Line of Load Lookout and Miners Memorial pays poignant tribute to more than 800 miners who lost their lives while working on the Line of Lode. The memorial is accessible by car and offers spectacular views of the surrounding region. It’s a must-visit.

Australia loves its ‘bigs’ and before leaving the memorial site, check out the ‘Big Bench’ — a reasonably modest 2.5 times the size of a normal park bench.

2. Do a self-guided heritage walking tour

Next, grab your camera, don some comfortable shoes, and set off on a self-guided walking tour of the grand boom-era buildings that make up Broken Hill’s city centre. You can pick up a map from the excellent Visitor Information Centre on Bromide Street.

Take some time out en route to explore Trades Hall, which played a significant role in the development of trade unionism in Australia. It houses a fascinating collection of memorabilia — and make sure you look up and take in its soaring ceiling. History was made here in the 1920s when miners forced the mine owners to improve wages and safety standards. If only these walls could talk; there were probably plenty of colourful words exchanged at the time!

As you pass the Broken Hill Council Chambers, look for the bronze busts of the ‘Syndicate of Seven’. These are the men who founded Broken Hill Proprietary (BHP).

3. Ride the rails back in time at Sulphide Street

You don’t have to be a train spotter to enjoy the Sulphide Street Railway and Historical Museum; there’s bound to be something here to interest just about everyone. This main building is the original Broken Hill railway station — the terminus of the Silverton Tramway — and dates back to 1905. There are heritage trains to explore (including carriages from the famed Silver City Comet), and a wealth of rail artefacts. The site is also home to the Broken Hill Migrant Heritage Museum, Hospital Museum, Transport Pavilion, and Mineral Collection.

A visit to Bells Milk Bar on the southern side of town is like stepping straight onto the set of the movie Grease. The original store that occupied this site (circa 1892) sold candy and cordials. The Bells you see today was born in the 1950s and carried on the tradition of serving syrupy slurp-fests. There’s a rainbow of milkshake and soda spider flavours to choose from.

The parched beauty of the outback has long inspired artists and Broken Hill has more than twenty arts facilities to explore. The excellent Broken Hill Art Gallery, the oldest in regional New South Wales, holds everything from historical works to cutting-edge contemporary pieces.

The city was home to the famous ‘Brushmen of the Bush’ in the 1970s and 80s — Jack Absalom, Pro Hart, Hugh Schulz, John Pickup and Eric Minchin. These five artists’ love of painting the surrounding desert landscape saw them exhibit as a group worldwide and raise money for various charities, including the Royal Flying Doctor Service. The late Kevin ‘Pro’ Hart’s quirky and humorous work, including some large-scale public sculptures, can be spotted around town, and the family-owned Pro Hart Gallery is an absolute must-see. Clock Pro’s muralled Roller in the garage.

While not, strictly speaking, a gallery, the Silver City Mint and Art Centre on Chloride Street does have something to interest art lovers. Shop for unique silver jewellery, gaze at the wondrous selection of locally made chocolates, and consider The Big Picture (literally) — a 100-metre-long acrylic canvas painting, thought to be the largest in the world by a single artist.

Broken Hill’s Palace Hotel famously featured in the iconic Aussie movie The Adventures of Priscilla, Queen of the Desert, and the interior has to be seen to be believed. The first thing you’ll notice is the very large stiletto that stands proudly in the foyer. Then feast your eyes on the epic Australiana murals that cover the walls (most of which were painted by Indigenous artist Gordon Waye in the 1970s). Enjoy a drink or meal and soak up the theatrical interior of this grand old establishment. The hotel stages the popular Broken Heel Festival each September.

An award-winning parmi (the best in regional NSW according to the Australian Hotels Association) is one good reason to visit the Tydvil Hotel in the city’s north; the newly opened Broken Hill Distillery in a stone building at the rear of the pub is another. This boutique gin-maker is destined for big things and offers a mid-morning tour and tasting for $20pp (at the time of writing). You get that back if you make a purchase, and choosing between the likes of their Gunpowder Gin and Outback Moonshine is no mean feat. Stay on at the pub afterwards for lunch.

8. Head down under on a mine tour

You’ll no doubt be planning a day trip out to the tiny heritage town of Silverton, twenty-or-so kilometres north-west of Broken Hill. Make your first stop the historic Day Dream Mine (take the right-hand turn off Silverton Road). This former silver mine predates the formation of BHP and offers an informative guided tour. You’ll learn about the hardships faced by those who worked underground in the 1880s — some just children as young as eight. Mind your head and hold on to the handrails as a guide leads you down three levels of narrow tunnels. It’s quite an eye-opener.

9. Go on set in Silverton

A short drive further on from the mine turnoff will bring you to the quirky Silverton township. Set against a backdrop of the sprawling Mundi Mundi Plains, this rustic settlement is renowned for having featured in several blockbuster movies — including Mad Max 2, A Town Like Alice, and The Adventures of Priscilla, Queen of the Desert. The Mad Max 2 Museum, complete with some of the movie’s bizarre motoring hardware parked out the front, is a mecca for hardcore fans. Speaking of which, owner Adrian relocated from the UK specifically to run the museum!

You can’t leave town without visiting the Silverton Hotel. It’s everything you would expect from an outback Aussie pub. Oh, and watch out for the free-roaming donkeys that plod around town (especially if you happen to be eating an ice cream!).

10. See sculptures in the desert

Standing like silent sentinels on a hilltop overlooking the vast expanse of the outback, the Living Desert Sculptures are possibly Broken Hill’s most popular attraction. The twelve large sandstone artworks were created by a mix of local and international artists, and unveiled in 1993. The best time to see them is just before sunset, but keep in mind when planning your visit that it’s a nine-kilometre drive from town. You can drive right up to the sculptures or do a 1.5-kilometre walk to the peak through the John Simons Flora and Fauna Sanctuary. Those opting for the latter should bring a hat and plenty of water.

The setting sun bathes the works in warm hues and generates endless photo opportunities. If you’re there at the right time of year, you may get a prized pic of the glowing orb of the sun shining directly through the circle of the Aztec-inspired piece.

Cap off your stay in Broken Hill with dinner and drinks at the characterful Mount Gipps Hotel — now part of the Broken Hill Outback Resort. Dating back to the late 1800s and located ten-minutes’ drive from town on the main drag from/to Sydney, this pub has served countless weary travellers. You can just imagine them covered in red dust and enjoying a cold beer, while yarning about their outback adventures. The hotel is very popular on weekends and offers live music.

Top Oz Tours offers a great range of New South Wales day tours, guided experiences, and attraction tickets and passes. There are no booking or credit card fees when you book through us, and you'll have access to the widest choice of activities and most competitive prices.

Do you have any suggestions to add to our list of the best things to do in Broken Hill? We would love to hear from you. Please leave a comment below. 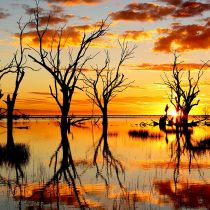 Top 10 Things to Do in Menindee, NSW Top 10 Things to Do in Mildura, VIC