Review: Take a journey of ancient discovery on a Kakadu day tour to Ubirr from Darwin

While a day trip from Darwin to Kakadu National Park can only scratch the surface of this world renowned Australian wilderness, you'll enjoy two of the park's signature experiences on this small group tour: a visit to the age old rock art galleries at Ubirr and an Indigenous cultural cruise on the East Alligator River.
Nannette Holliday
Australia, Darwin, Kakadu National Park, Northern Territory

The vast park is a three-hour drive from Darwin, and while many visitors choose to spend a few days exploring Kakadu, if you’re short on time it can be done as a day trip. Offroad Dreaming offers a Kakadu tour from Darwin that includes two of the most significant must-dos: a visit to the Ubirr rock art galleries and a cruise on the East Alligator River.

Hotel pick-ups begin in the dark and I’m the first at 5.20am. At each stop Norm, our chirpy driver, introduces everyone even though most of us are still half asleep. It’s not until our brief sunrise coffee stop at Corroboree Park Tavern that we start to wake up and have a chat. Shortly after entering Kakadu National Park, we make another stop where everyone purchases their national park pass. This is not included in the tour price, and the cost varies depending on each person’s circumstances.

Our 20-seater bus is full of southern visitors escaping the cold. Pushing on, we reach Ubirr around mid morning. Everyone is excited to see the world-renowned Indigenous rock art paintings (one of the key reasons for Kakadu’s dual World Heritage-listed status), and the views of the Nadab floodplains from the top of Ubirr Rock, which have featured in several Australian movies. The one-kilometre circular walking track is easily navigable for most people, and each art site has interpretive signage that supplements Norm’s commentary. 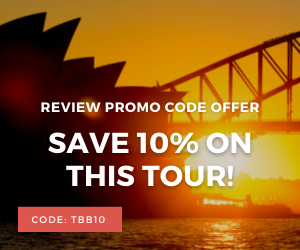 Rock art painting (gunbim) remains an important part of local Aboriginal culture. It’s an expression of cultural identity and connection to country. Filled with wonder, we marvel at the intricate layers of paintings, with the older ones often covered by newer ones. Near the main gallery is a painting of a thylacine (Tasmanian tiger), which became extinct on the mainland 2,000 to 3,000 years ago. X-ray of paintings in another gallery have revealed their age to be at least 1,500 years. There are images of turtles, fish, wallabies and goannas.

In the main gallery, ‘contact art’ shows a whitefella wearing a shirt and boots, with his hands in his pockets. He was probably a buffalo hunter — painted in the 1880s. It’s said that the Rainbow Serpent (a creation ancestor) painted her image on the same rock to remind people of her presence. Ochres were crushed on stone and mixed with water to make the paint. Haematite — a reddish iron oxide, lasts the longest; hence the majority of old paintings being completely red. Human hair, reeds, feathers and chewed sticks were used as brushes. The hand stencils are each artist’s signature. The artist would blow wet pigments around their hand to leave the imprint.

The 250 metre climb to the top of Ubirr is a little more challenging, but with the assistance of fellow passengers, we are all able to stand and gaze in awe at the 360-degree views. It’s forty years since I first encountered this view and it’s barely changed. I’m heartened to see that the Parks and Wildlife Commission of the Northern Territory in conjunction with the traditional owners are managing the large visitor numbers with little or no effect on the environment. Pulling ourselves away from the mesmerising colours of the surrounding landscape is difficult. The luscious green floodplains that have resulted from the recent heavy wet season, contrast with the cobalt blue skies and reddish-grey rocky outcrops of the Arnhem Land escarpment. It’s stunning.

Returning to the car park rest area, we find that Norm has a roast chicken and salad lunch ready for us. Then it’s time to depart for our next adventure — a Guluyambi Cultural Cruise on the nearby East Alligator River.

With a limit of 25 guests per cruise, we’re the sole participants, which makes for a more personalised experience. These cruises are owned and operated by the traditional owners, and our well-spoken 28-year-old Bininj guide from Arnhem Land shares many aspects of his culture and heritage, including mythological beliefs, local food sources, the traditional uses of plants and animals, and how the Bininj have lived in harmony with the environment for thousands of years.

Cruising downstream to Cahills Crossing, we see the remnants of washed away vehicles — proof that this river isn’t always as gentle as it is today. The surrounding wilderness seems serene and relaxing, until a crocodile is spotted floating next to a partly submerged tree. We’re abruptly reminded this is their territory and as peaceful as it appears, swimming is not on the agenda!

At each bend in the river a new and vibrant scene is revealed — including lush monsoon forests, leaning paperbarks, wild hibiscus bushes, rocky outcrops and overhanging rock art sites. There are staggering views of the Arnhem Land escarpment on one side and Kakadu on the other. It’s paradise.

Just a few metres from a three-metre crocodile resting on the sand under a paperbark, we’re invited to go ashore on the Arnhem Land side of the river with special permission from the local custodians. Gingerly we trek inland to view a billabong and the surrounding rock formations. It’s a chance to absorb the true spirit of the land. Before re-boarding the boat, our guide provides a display of traditional hunting techniques, but the barramundi are being elusive and avoid his spear.

Norm has prepared some fresh fruit on our return and Nev, another local custodian (and former film star!), entertains us with stories of his varied life and the film crews that have showcased these magical lands. It’s soon time to begin the long journey back to Darwin.

The writer travelled as a guest of Offroad Dreaming. 10 Best Things to Do in Kakadu National Park, NT 10 Best Things to Do in Litchfield National Park, NT