Review: Cleanse mind and body at the Peninsula Hot Springs on the Mornington Peninsula, VIC

Book a tour from Melbourne

The stunning Mornington Peninsula has long served as a retreat for stressed Melburnians.

This tranquil piece of Victoria combines the best of coast and country, and there are myriad ways to unwind across the region — including a visit to the uber popular Peninsula Hot Springs. Opened in 2005 by brothers Charles and Richard Davidson, its mission is to reconnect guests with their own ‘well of vitality’ through bathing, therapeutic spa treatments, and even gourmet dining. I’m hoping to wash away a particularly stressful few months during my visit.

The hour-and-a-half drive from Melbourne is, in itself, refreshing. If you don’t have your own transport, you can opt to join a Peninsula Hot Springs tour from Melbourne. It includes hotel pick-up and spa entry, along with a platter lunch and wine tasting at a local cellar door.

The Peninsula Hot Springs is tucked away in a bushland setting at Fingal and feels fittingly off the grid. Resplendent in a thick bathrobe, I’m soon seated in the zen dining area overlooking the hot springs, where I catch glimpses of people strolling by the steaming pools below looking like mystical wood nymphs. The thermally heated waters here rise to the surface at around 50 degrees celsius, infused with a cocktail of natural minerals and salts. According to the centre, the physical benefits of bathing in the hot springs are many, including improved blood circulation and cell oxygenation. As a writer, workaholic habits die hard and I pull out my laptop to keep notes on the experience. The staff are quick to point out that it’s probably best to do a digital detox, so I ditch the electronics and go old school with a pen and paper. For some reason my eyes start to burn with hot tears. The cleansing seems to have begun!

Then it’s time to bathe in one of the more than twenty pools of various sizes and temperatures set around the beautifully rocky and bushy setting. I begin in the sauna with a gentle stretch, then slip into a nearby pool under a waterfall. I bob about for a while before moving to another warm, shallow pool to float and kick a little.

Next I wander past a meditation room (that looks like something out of The Matrix) before making my way to the Turkish Haman. It’s empty. I sit on the marble floor holding a shower nozzle over my head. Here the cleansing really kicks in. Water gushes and steam rises, mixed with more unexpected sobs. It lasts for a good ten minutes.

I tiptoe out feeling calmer and more centred. Hopping into a small round pool, I chat quietly to a couple who recommend a dip in the nearby cold pool at least three times during my bathe. I decide to follow their advice, plunging in, then gasping and sliding into a larger warm pool to swirl and awaken my inner mermaid.

All too soon it’s time to shower, change, and take my leave. My quest to rediscover the well of vitality appears to have been successful. And guess what? The water is warm.

The writer travelled as a guest of the Peninsula Hot Springs. Ruby Boukabou is a travel, culture and food writer based between Europe and Australia, and has written for The Age, The Australian, Qantas, Issimo, The Diplomat, Paris Voice and Inside Film. She has also produced culture and travel stories for the ABC, SBS and Screen Australia. When Ruby’s not writing, she’s probably tap dancing. She’s a founding member of the Paris Tap Crew and a member of jazz/world music group Le Shuffle Project, which records and performs in Paris and beyond. Ruby’s books — The Art Lover’s Guide to Paris and The Architecture Lover’s Guide to Paris (White Owl Books) — are available in bookshops and to order online. Top 10 Things to Do on the Mornington Peninsula, VIC Top 10 Things to Do in the Dandenong Ranges, VIC 10 of the Best Day Trips from Melbourne 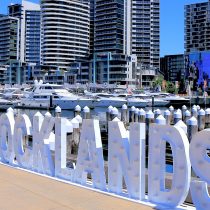