The unorthodox delivery of the tickets was just the start of this adventure in Buenos Aires for guest contributor and diehard football fan Joanne Karcz. A Boca Juniors match is not for the fainthearted and a ticket doesn’t mean you actually get a seat to yourself!
Joanne Karcz
Argentina, Buenos Aires, South & Central America
Browse tours and experiences

I’ve cheered at local football games and seen the Socceroos win a place in the World Cup at the Olympic Stadium in Sydney, but nothing compares with my experience at a Boca Juniors game in Argentina.

If you are planning a visit to Argentina, here are some useful tips for attending a football match in Buenos Aires — and perhaps what to avoid!

We booked our tickets through our hotel tour desk. The concierge arranged for us to meet our guide in the foyer at the appointed time, be taken to the game and then brought home again. I suppose that is what happened, but there was so much more to it than that!

Our guide arrived and directed us to his small, rather battered old sedan. We chatted about the upcoming game, learning that Boca Juniors were playing their arch rivals Racing Club. Boca had lost the previous 13 games and really needed a win. When our ‘guide’ handed us our tickets, we realised he was not coming with us. Apparently another paying customer, an Argentinian from outside of Buenos Aires, who spoke no English, would be our companion. We had bought our tickets from a scalper!

As we approached the stadium, the excitement began to build. Fans streamed towards the ground. All wore the blue and white of Racing. No Boca supporters were to be seen. Our guide pulled up to a policeman who was directing traffic. In a low voice, so as not to be heard by the Racing fans, he asked for directions to the Boca entrance. Our anxiety started to rise. The supporters of the two teams were being kept apart!

Our guide dropped us off, instructing our companion where to meet after the game. We had no idea where we were and no means of communicating with our chaperone. We hurried after him, concerned about getting lost in the throng.

You expect security at a stadium, but nothing like this. First we were patted down. Not once, but three times. Then we walked past a row of mounted and armed riot police before climbing the concrete stairs to our seats. There were none of the usual comforts of a stadium in Australia. No fast food outlets or colourful advertising. Just a bland concrete building and concrete bench seating.

As supporters of the away team, we were seated in a cage, fenced on either side by razor wire. Armed riot police lined the fence. Between us and the field was a floor to ceiling net and a deep moat filled with water.

On our left was another area set aside for Boca fans, who were crowding into the space far too small for their number. Not to worry — they just scaled the fence separating the two areas! They poured in until the capacity of our section more than doubled. Shoulder to shoulder, we had to stand if we wanted to see anything. And as soon as we stood up, someone stood on our seats!

Throughout the game the crowd sang and chanted, jumping up and down, up and down, holding onto the shoulders of the people in front of them and punching the air with their right arms. So there I was, a middle aged woman in a sea of highly charged Argentinian men, jumping and punching my arm in the air, while a stranger leaned on my shoulders as he jumped and punched the air. The whole stadium rocked.

Boca won the game, thank goodness. I don’t think we would have got out alive if they had lost!

Top Oz Tours offers a great range of Argentina day tours, guided experiences, and attraction tickets and passes. There are no booking or credit card fees when you book through us, and you’ll have access to the widest choice of activities and most competitive prices.

Do you have any tips for attending a football match in Buenos Aires? We would love to hear from you. Please leave a comment below. Joanne Karcz is a Sydney-based writer and blogger. She published a blog when she walked the Camino de Santiago some years ago and has been writing about her travels ever since. She is also an aspiring travel photographer and takes her camera wherever she goes. Joanne has travelled through Europe, South America, and Southern Africa. She loves discovering new things to see and do in her own Sydney backyard, and blogs regularly about the city’s suburbs. 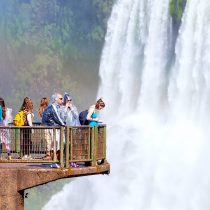 Insider's Guide: How to Spend 24 Hours in Cusco, Peru