There's nowhere quite like Broome on the edge of the vast Kimberley region. This remote blend of quirky characters, quintessential outback experiences, fascinating Indigenous culture and all-encompassing natural beauty will stay with you long after your visit comes to an end. Tick off these ten fabulous things to do.
Bonita Grima
Australia, Broome, The Kimberley, Western Australia
Browse tours and experiences

Broome is a pioneer pearling town and the gateway to Western Australia’s ancient Kimberley landscape.

Filled with rugged ranges, dramatic gorges, cascading waterfalls, and untouched coastline, the Kimberley has earned a place in the hearts of travellers the world over. And its most populous town is packed with cheeky charm.

Best known for a staircase that seemingly ascends to the moon, the 22-kilometre-long splendour of Cable Beach, an annual pearl festival, a heritage open-air theatre, and the tall-tale-telling ability of local larrikins, there’s something about Broome that gets right under the skin.

Here are ten of the best things to do in Broome and along the neighbouring Dampier Peninsula.

Having marked its 50th anniversary in 2020, Shinju Matsuri — the ‘Festival of the Pearl’ — celebrates Broome’s rich cultural diversity and the influences of the Japanese, Malay, Filipino, Chinese, Koepanger, and European pearlers who came to this outpost in the late 1800s to work alongside local Yawuru people (who already had a long pearling history of their own). Taking place in late August each year, Broome’s premier cultural event features food, music and art. Highlights of the programme include a colourful street parade, Floating Lantern Matsuri (where paper lanterns are released on the tide), and a sunset long table dinner prepared by celebrity chefs.

Make tracks to Gantheaume Point at low tide to see the fossilised footprints of dinosaurs. Dating back 130 million years, footprints preserved in the reef rock were first found here in the 1940s. More were discovered by a woman collecting shells in 2016. There’s interpretive signage near the lighthouse, but for greater understanding, join a tour with local Yawuru man Bart Pigram of Narlijia Cultural Tours. In addition to hearing Dreamtime stories attached to the footprints and saltwater country, you’ll learn about life on this land for the Yawuru and Djugun people.

3. Ride a camel on Cable Beach

Originally introduced to Australia by Afghan cameleers for the transportation of goods, camels have trod the Kimberley since the early 19th century. Award-winning tour operator Red Sun Camels has been in the business of transporting people for more leisurely purposes since 1991, and a ride across the sands of world-famous Cable Beach at sunset is one of Western Australia’s signature experiences.

Watch our video of the top things to do in Broome:

Top Things to Do in Broome, Western Australia, 2022 | Travel Guide

★ Did you enjoy this video? Help us make more by hitting the subscribe button! It will help us get more destinations on board. Thank you! ★Related | Ten of t…

Shooting to stardom in 2018 after appearing on the ABC’s Stargazing Live, Broome local Greg Quicke is a self-taught astronomer who runs Astro Tours on the outskirts of town. Spend a fascinating evening under the stars with the man dubbed Australia’s ‘Space Gandalf’ — as you peer through telescopes of all shapes and sizes. With lots of hot chocolate to keep your energy up, listen as Greg delivers some pretty mind-blowing observations about our universe.

Located on the Dampier Peninsula, 2.5 hours’ drive north of Broome (or ‘just up the road’ to locals), Cygnet Bay Pearl Farm is a Kimberley treasure. Established in 1946, Australia’s oldest and longest operating pearl farm not only cultivates the jewels of the sea, it also offers guest accommodation — ranging from old pearlers’ shacks to glamping tents.

6. Learn about Indigenous culture at Kooljaman

On the opposite side of the Peninsula at Cape Leveque, Kooljaman is an Indigenous wilderness camp owned and operated by the Bardi Jawi people. Guests are invited to learn about their hosts’ culture, relax at beautiful swimming beaches, and visit the spiritually significant red cliffs (an area that’s particularly striking at sunset). There’s the opportunity to join a bush food and medicine tour, or get a handle on Aboriginal fishing and crabbing methods. Breakfast and lunch are served at Kooljaman’s restaurant — Raugi’s — where you’ll gain an appreciation for native flavours.

7. Catch a flick at the world’s oldest picture gardens

Back in Broome, let’s go to the movies — Kimberley-style! Opened in 1916, and having screened classics like King Kong and Lawrence of Arabia, Sun Pictures is as much a museum as it is a movie theatre. A pre-film wander around the world’s oldest outdoor cinema is worth doing for the collection of memorabilia, including black and white photos and old movie posters. The theatre is positioned directly under Broome Airport’s flight path, and watching an action flick will have you feeling more than just the magic of the movies as planes seem to jump out of the screen!

8. Explore Chinatown with a local guide

Once notorious for illicit drinking dens, opium houses, bazaars and brothels, today the multicultural streets of Broome’s Chinatown hold interest for visitors because of their many restaurants, bars, shopping boutiques and sites of historical significance. Combine colourful history with gastronomical delights by taking a walking tour with Salty Plum Social. Their guides use digital projections on buildings to share stories associated with the area, and introduce you to three of their favourite bars (with canapes and a drink at each venue included).

9. Take in the colours of the Kimberley by air

The Kimberley’s famous colour palette consists of rich reds and brilliant blues as pindan earth meets sea — and the best way to see it is by air. Air Kimberley offers a range of scenic and chartered flights from Broome to the region’s most picturesque destinations, including Cape Leveque, Cygnet Bay, the Bungle Bungles, and both the Mitchell and Horizontal Falls.

All trips (with the exception of the Broome and Beaches option) provide the chance to connect with the landscape below. Go hiking, swimming, boating or 4-wheel driving, and perhaps even do an overnight stay. Air Kimberley’s pilots double as tour guides, so strap in, sit back and relax as they provide informative insights about the stunning Kimberley landscape.

Sundowners are a longstanding tradition in Broome and there’s no shortage of venues in which to enjoy a chilled beverage during golden hour. Zanders at Cable Beach and Cable Beach Club’s Sunset Bar and Grill are both ideally placed for watching the sun sink into the Indian Ocean over a cocktail.

Top Oz Tours offers a great range of Western Australia day tours, guided experiences, and attraction tickets and passes. There are no booking or credit card fees when you book through us, and you'll have access to the widest choice of activities and most competitive prices.

Do you have any suggestions to add to our list of the best things to do in Broome? We would love to hear from you. Please leave a comment below. Bonita Grima is a Perth-based freelance travel writer with a background in television and radio production. She believes that travel has the power to challenge, inspire, and educate us, and encourage empathy by providing a window into the worlds of others. When not working on a story, you’ll find Bonita at the beach, on a hiking trail, drinking great coffee, discovering what’s new around town, and dreaming up her next big adventure! Top 10 Things to Do in the Kimberley, WA 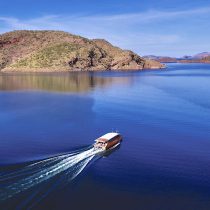 Top 10 Things to Do in Kununurra, WA