On a visit to Melbourne, you can almost see the CBD skyline changing before your very eyes.

A forest of cranes denotes the latest building boom and return visitors will often find themselves remarking: ‘Ooh, that’s new’, or ‘Wow, when did that go up?’. But between the dizzyingly high apartment blocks and corporate towers, it’s the gems of yesteryear that still define Victoria’s capital.

Tick off these ten must-see historic buildings in Melbourne during your stay.

No single building is as synonymous with Melbourne as Flinders Street railway station. Dependably familiar and yet somewhat enigmatic (few locals have seen what lies behind the windows on the upper floors), thousands of commuters pour out into the city streets from beneath the station’s famous clocks each day, before passing back under them on their homeward journey. A railway terminus has stood on this site since 1854, but the incarnation you see today was completed in 1910 (although the aforementioned clocks date back to the 1860s).

Stand on the opposite corner of Flinders and Swanston Streets for the best view of the ornate Art Nouveau facade, and take in the pressed metal work, wrought iron railings, copper clad domes, stained glass, and many other distinctive decorative elements. They just don’t make them like this anymore!

Sitting diagonally opposite Flinders Street station, St Paul’s Anglican Cathedral is one of a host of places of worship in the CBD. But there are few as impressive in stature as this 19th century neo-Gothic transitional masterpiece. Designed by English revival architect William Butterfield, St Paul’s was constructed over the course of eleven years and consecrated in 1891. And while the building emanates a strong connection with the past, this is a church that doesn’t shy away from championing the issues of today. It’s been an outspoken advocate for reconciliation and refugee rights, and continues to campaign strongly for a decarbonised future. A stroll through adjacent Chapter House Lane will whisk you away to old-world Europe.

Sitting at the top end of town, Spring Street is home to the state parliamentary precinct and lined with structures of note — including the glorious Old Treasury Building. Dating back to the 1860s and regarded as one of the country’s finest examples of Renaissance revival architecture, the palazzo-esque Treasury was built on the back of the Victorian gold rush and served as a storehouse for the incredible wealth extracted from the ground in central and western Victoria. It continued to play a key role in the governance of the state right up until the 1990s. Today, a portion of the building (including the original gold vault) is open to the public as a museum. Entry is free.

One of the ongoing exhibitions at the Old Treasury chronicles the penchant of Melburnians for taking to the streets. The city’s first street protest took place in the 1840s, and groups have been marching up Collins and Bourke Streets to Parliament House to make their grievances known ever since. Parliament House has been the seat of the Parliament of Victoria since 1855, except for the years between 1901 and 1928 when it served as the temporary Parliament of Australia. The complex was built in stages from 1856 to 1929 and while it looks every inch the business, it’s actually incomplete. Learn more by doing the excellent free guided tour, which is offered on non-sitting days.

Head a bit further along Spring Street to see the stunning star of Melbourne’s theatrical scene — the Princess Theatre. An entertainment venue has stood on this site since the mid 1800s. The building you see today was constructed in the late 1880s in the ornate Second Empire architectural style, which emerged in France under the rule of Napoleon III. Note the mansard roofline and circular dormer windows, which wouldn’t look out of place in the French capital. The interior is just as exquisite, but you’ll need to book tickets to a show to see it.

Framed by the tranquil Carlton Gardens (a favoured lunchtime retreat for city workers), the UNESCO World Heritage-listed Royal Exhibition Building is one of the last remaining ‘palaces of industry’ from the golden age of the World Fair/Exposition. It was erected in 1880 to host the international exhibition that year, and fufilled the same role in 1888. Architect Joseph Reed drew his inspiration from the legendary Crystal Palace exhibition hall in London (partially destroyed by fire in 1936 and finally demolished in 1941) and the Florence Duomo (Cathedral). The building you see today remains largely faithful to his intended design.

If you only venture inside one of Melbourne’s many 19th century edifices, make it the State Library Victoria on the corner of Swanston and La Trobe Streets. Prepare to be gobsmacked by the extraordinary beauty of the columned Queen’s Hall — the library’s original public reading room — and that of its successor — the Domed Reading Room, which sits at the heart of the complex. This six-storey, octagonal shaped hall is incredible in its proportions and brims with Edwardian period detail. If this doesn’t inspire you to pick up a book, nothing will.

The library offers a range of activities to suit all age groups. Wander through the ongoing World of Books exhibition (which displays rare manuscripts and limited-edition prints), see bushranger Ned Kelly’s famous armour, get on the trail of lost ancestors in the genealogy department, or unleash the creative spirit of your under 12s in the Children’s Quarter.

Speaking of our Ned, also take this opportunity to visit Old Melbourne Gaol on Russell Street (it’s just a five-minute walk from the library). At one time, this was the most infamous prison in the country. Kelly was executed here (along with 132 others over the course of the gaol’s 70-year working life), and inmate names like Squizzy Taylor and Ronald Ryan can still push the pulse rate up just a little. It’s not hard to catch a glimpse of what life would have been like for the incarcerated in this cold bluestone complex. Crank up the fear factor on a night tour of the echoing halls and shadowy cells.

As Melbourne approached its centenary in 1934 and sought to allay the effects of the 1929 Wall Street crash and subsequent Great Depression, a construction boom began that would leave the city with a wealth of Art Deco buildings. Today, the more you look, the more you’ll see. The Nicholas and T & G Buildings are two high profile examples of the angular architectural style, but there are lots of lesser-known examples to seek out — including Yule House on Little Collins Street (thought to be the city’s oldest Art Deco structure) and the Cathedral Arcade (located under the Nicholas Building).

However, it’s the wonderful Manchester Unity Building on the corner of Collins and Swanston Streets that acts as the genre’s flag bearer. Take a stroll through the street level arcade and admire the friezes depicting hard work as the way to beat the woes of the Depression. The building contained Melbourne’s first telephone exchange and escalator.

A visit to a bank branch is a rarity these days, but dropping by the ANZ Gothic Bank on the corner of Collins and Queen Streets is a must-do for history buffs — and no deposit is required to admire what lies within. Constructed between 1883 and 1891 as two separate buildings — the English, Scottish and Australia Chartered Bank (ES&A) and the Melbourne Stock Exchange — the two Gothic Revival edifices were combined as one in 1921 and became the headquarters of what is today the ANZ Bank. We won’t give too much away, except to say that stepping inside the Venetian Gothic-style banking hall will leave you richer for the experience.

Melbourne’s historically significant buildings aren’t all venerable. The city watched in awe as over the course of four years, Eureka Tower in Southbank inched its way 300 metres skyward. Finally completed in 2006, it was only pipped as the city’s tallest building in 2020 (by Australia 108 at 317 metres in height). It’s a spring chicken compared to the company above, but special mention goes to the design — which symbolises the events of Victoria’s Eureka Rebellion and Stockade of 1854.

The gold crown of the tower references the Ballarat goldfields, while the blue and white colours reflect those of the revered Eureka flag. A thin strip of red running down the side of the building represents blood spilled during the short-lived, but highly significant rebellion. It claimed at least thirty lives and is said to have given rise to Australian democracy.

Where to stay in Melbourne

Period elegance and contemporary style meld seamlessly at Rendezvous Hotel Melbourne — one of the city’s finest and best located historic hotels. Overlooking Flinders Street station, the Yarra River, and the Southbank precinct, you can’t get more central than this.

The 340-room hotel occupies what was once the Commercial Travellers’ Association of Australia Club, which opened its doors in 1913 to accommodate a membership of largely travelling salesmen. The building fell into disrepair but was completely refurbished in the late 1990s, and today it’s one of the finest examples of Edwardian Baroque style in Melbourne. Natural light floods the recently updated guest rooms, which feature plush quilted headboards, custom-designed soft furnishings, and well-appointed bathrooms.

The stylish foyer area offers a range of comfortable reading nooks and hosts the Traveller’s Bar — the perfect spot to relax with a beverage after a hard day of sightseeing. Down on the lower-level, Mr Tompkins restaurant — a nod to the building’s original architect — serves a fabulous buffet breakfast and a la carte dinner menu.

The writer travelled as a guest of TFE Hotels and Rendezvous Hotel Melbourne.

Do you have any suggestions to add to our list of must-see historic buildings in Melbourne? We would love to hear from you. Please leave a comment below. 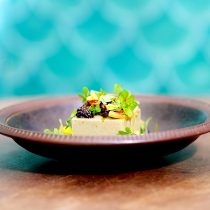 An Insider’s Guide to Melbourne Dining 10 of the Best Melbourne Attractions