People have strong opinions about ‘street art’, which often depend on the work itself and where it appears (legally or illegally in many instances).

Our small group meets at Newtown Railway Station. Melinda Vassallo is our guide — and the author of a book called Street Art of Sydney’s Inner West. She hands out souvenir calico tote bags and printed lists of the names of the street artists whose work we may see today. Melinda knows many of the artists personally.

We cross King Street and walk through the busy Saturday market at The Hub. We’re on the lookout for a particular ‘paste up’ (an image on paper that is pasted onto a wall), but sadly it appears to have been taken down in the past few days. What a pity.

That’s the ephemeral nature of street art. It may last years or only a day or two. The local councils tolerate it in some designated areas, but in others it is cleaned off regularly.

Street art isn’t necessarily about paint or paste either. We move on to a life-size concrete sculpture of a washing machine, created by Will Coles. Featured in a Coldplay music video, it now sports a number of tags and a paste up or two. We see more of Will’s sculptures along the way, including a balaclava and a forgotten shoe.

On Alton Lane — just down from Newtown Police Station — we view a piece by Anthony Lister. As Melinda explains how Lister painted his work high up on the wall in front of us using long poles, a police car cruises past slowly. Perhaps the officers are checking what we’re up to. It’s an interesting juxtaposition.

In another narrow street, a row of garage doors are covered in graffiti — all except one. It’s painted dark green, and there’s a sign in the middle of the door that reads: ‘Please do not deface this door with graffiti.’ For some reason street artists have respected the request.

In order to have more control over what is painted on their walls, some property owners choose to work with street artists. Some even apply for council approval for the work. Marrickville Council has introduced an innovative program called ‘Perfect Match’, where it funds artists to create works on walls that were previously subjected to unwanted graffiti. In stark contrast, the rail authority (Sydney Trains) has zero tolerance for graffiti. It prosecutes offenders and routinely paints over their work.

Melinda introduces us to artist names such as Birdhat, Ears, Phibs and Jumbo, and describes their individual styles. Days — another artist whose work is often seen on this Sydney street art tour — considers himself a ‘graffiti artist’ — not a ‘street artist’. ‘The distinction between the two is blurred’, says Melinda. One difference is that the tagging and complex lettering used by graffiti artists often can’t be deciphered by the public, whereas street art tends to have more conventional artistic appeal.

The tour ends with a refreshing pale ale at Young Henry’s craft brewery in Newtown. Here we raise a toast to Birdhat, Ears, Phibs, Jumbo and Days.

The writer travelled as a guest of Culture Scouts.

Browse our range of Sydney tours and experiences here. We offer a Best Price Guarantee and COVID-19 Cancellation Guarantee. Joanne Karcz is a Sydney-based writer and blogger. She published a blog when she walked the Camino de Santiago some years ago and has been writing about her travels ever since. She is also an aspiring travel photographer and takes her camera wherever she goes. Joanne has travelled through Europe, South America and Southern Africa. She loves discovering new things to see and do in her own Sydney backyard, and blogs regularly about the city’s suburbs. 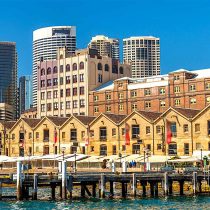 Review: The Rocks Walking Tour and YHA Sydney Harbour are a cost effective way to step back in time