Planning to explore the fabulous United Kingdom by road? You're spoilt for choice for possible itineraries, but London to Edinburgh is one of the most popular options. Work your way through this checklist of amazing things to do along the way.
Adam Ford
Edinburgh, England, London, Scotland, Stratford-upon-Avon, United Kingdom, York

The United Kingdom was made for road trips by Aussie travellers; the Brits drive on the same side of the road as us, and you never have to travel far to see something amazing!

In fact, there’s no better way to explore the UK than under your own steam. The roads are excellent, and this is a destination packed to ye olde rafters with ‘ooh’ and ‘ahh’ moments. From grand castles, stately homes, and quintessential village idyls, to crashing coastline, mysterious moors, and the incomparable Scottish Highlands, the list of places to see and things to do is endless.

How long will you need? The answer is, how long do you have! Aussies don’t need a visa to travel to Britain as tourists (just a valid passport and a reason for visiting that meets immigration rules). However, if you plan to stay for more than six months, you’ll need to apply for a visa. UK entry requirements for Australians dictate that they should have ready employment in order, be proficient in spoken English, and have adequate savings. If you’re reading this, presumably you’re an English speaker. That’s 10 points in the bag right there!

Here are ten top things to do on a road trip from London in southern England, up to the Scottish capital Edinburgh, the Highlands, and ending in Glasgow. You could do this roadie in ten-or-so days, or stretch it out over a much longer period. One thing’s for certain: you’ll almost always want more time in each place you visit!

Watch our video of top things to do on a road trip from London to Edinburgh:

London is the capital of the United Kingdom and the arrival point for most Australian visitors. There’s more to see and do here than in possibly any other city on the planet, so prepare to get busy if you’re on a short stay. History buffs, you’ll want to spend some time revelling in the heritage gravitas of the Tower of London. Dating back to 1070, it has served as a fortress, palace, and prison (Elizabeth I and Anne Boleyn count among the most famous inmates). The Tower has long been home to the Crown Jewels — guarded by the Tower Guard and Yeoman Warders (Beefeaters).

Those interested in art are also in for a treat in London. Time Out estimates that there are around 1,500 permanent galleries and exhibition spaces across the city. If time is of the essence, the National Portrait Gallery is a great all-rounder. It displays portraits of actors and pollies, members of the royal family past and present, sporting heroes, and figures from British popular culture. It’s currently getting a makeover and will reopen in 2023.

2. Visit the birthplace of the Bard

A two-hour drive north-west from London will bring you to the medieval market town of Stratford-upon-Avon. This is one of Britain’s most popular tourist destinations and is packed with period buildings dating back to the 15th and 16th centuries. One in particular gets a lot of attention; it’s thought to be the birthplace of William Shakespeare — arguably the world’s greatest playwright. The restored two-storey cottage on Henley Street was home to Shakespeare, his parents, and seven siblings in the late 1500s. Now owned by the Shakespeare Birthplace Trust, the property is open to visitors all year round.

From Stratford, set your GPS for famous Chatsworth House on the edge of the Midlands’ Peak District National Park. This stately home and grounds are the seat of the Duke and Duchess of Devonshire and have been in the hands of the Cavendish family since the mid-16th century. Parts of the home are open to the public annually from late-March through to early January and showcase an incredible collection of fine art. Chatsworth featured as Mr Darcy’s home of Pemberley in the 2005 film version of Pride and Prejudice, starring Keira Knightley and Matthew Macfadyen. Keep an eye out for one of the home’s most famous sculptures — the Veiled Vestal Virgin by Raphaelle Monti — which made a cameo appearance.

4. Step back in time in York

There are plenty of towns and cities across the UK that bring the past to life, but perhaps none more so than York in Northern England. This cathedral city is steeped in 2,000 years of history and is still encircled in part by its medieval wall. The locations of the four main gates (bars) date back to Roman times and were used to collect taxes on goods entering the city. Take a stroll along the Shambles — a hotch-potch of 14th-century buildings crowding in on one another along a narrow laneway. It’s possibly the most photographed streetscape in Europe.

Crossing the English border with Scotland will bring you to Edinburgh — one of Britain’s best loved cities. Follow the Royal Mile up to brooding Edinburgh Castle, which served as the home of Scottish royalty for several centuries (and as their imposing line of defence against various invading armies). The castle is now one of Edinburgh’s most popular attractions and there are endless chapters of its history to explore. Don’t miss the firing of the one o’clock gun (at, yes, 1pm). Ships in the Firth of Forth once set their maritime clocks by the daily firing — a tradition dating back to 1861. For more military spectacle, time your visit to coincide with The Royal Edinburgh Military Tattoo (held annually in August).

6. Board The Royal Yacht Britannia

Edinburgh’s Palace of Holyroodhouse is the official Scottish residence of the British monarch. It’s open to the public all year round, as is one of Her Majesty’s former abodes — The Royal Yacht Britannia, which is moored just north of the city in Leith. Launched in 1953 and finally decommissioned in 1997, Britannia was built in Scotland and travelled more than a million nautical miles during her time in service. See the living areas, the very modest bedrooms, the Queen’s office, and the State Dining Room. It’s a fascinating insight into royal life.

7. Walk in the footsteps of kings at Scone Palace

Situated an hour’s drive from Edinburgh via the famous UNESCO World Heritage-listed Forth Bridge, Scone Palace was the site of the crownings of Scottish Kings from the 9th to the 17th centuries. Coronations — including that of Robert the Bruce in 1306 — took place over the Stone of Scone (also known as the Stone of Destiny) on the Moot Hill. The stone you see today is a replica; the original is housed in Edinburgh Castle. Visitors can tour the palace or simply explore the grounds, which cover around one hundred acres and feature a maze. Say g’day to the handsomely hirsute Highland cattle grazing contently in the neighbouring paddocks.

8. Sample a wee dram of The Glenlivet

No visit to Scotland would be complete without trying the signature local drop, and The Glenlivet Distillery is a fine spot to do it! This initially illicit early-18th-century operation hidden away in the Highlands eventually went legit and now produces one of the country’s best single malt whiskeys. The drive to the distillery from Scone (through sublime Cairngorms National Park) will take you just over two hours. Visitors can join a 1.5-hour tour-and-tasting and explore the interpretive centre, which showcases The Glenlivet’s intriguing history and many accolades.

9. Soak up the beauty of Loch Ness

Few visitors to Scotland leave without casting a casual eye over the tranquil waters of Loch Ness on the off chance of spotting its eponymous monster. The first reported sighting is thought to have been in the year 564 and Nessie has supported the local economy ever since. Located south of the city of Inverness, and just under 40 kilometres long, the loch is really stunning. However, try and get off the busy A82, so that you can breathe in the crisp air and scent of thistle minus the engine fumes. One of the most atmospheric places to pull over is Urquhart Castle. It was built in the 1200s, but reduced to ruins in 1692 by English forces keen to keep the Jacobites out in the cold.

Continuing south towards Glasgow, you’ll travel through the sweeping valleys of Glencoe and past gorgeous Loch Lomond — part of Loch Lomond and The Trossachs National Park. This is the largest loch in Scotland; in fact, it’s the most expansive stretch of fresh water in the UK. Cruise Loch Lomond operates a variety of sightseeing cruises throughout the day — including one around the loch’s northern reaches, which affords views of mighty Ben Lomond. Each cruise features commentary on the history of the region and points of interest that dot ‘yon bonnie banks’.

Do you have any suggestions to add to our list of top things to do on a London to Edinburgh road trip? We would love to hear from you. Please leave a comment below.

Adam Ford is editor of Top Oz Tours, and a travel TV presenter, writer, blogger, and photographer. He has travelled extensively through Europe, Asia, North America, Africa, and the Middle East. Adam worked as a travel consultant for a number of years with Flight Centre before taking up the opportunity to travel the world himself as host of the TV series Tour the World on Network Ten. He loves to experience everything a new destination has to offer and is equally at home in a five-star Palazzo in Pisa or a home-stay in Hanoi. 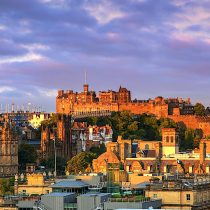