Traveller’s Tale: Top Things to Do in Hue, Vietnam

While Hue in Central Vietnam is a small city (a modest ninth on the list of Vietnamese urban centres by size), it has a whopping past.

This was the home and seat of power of the Nguyen emperors, who ruled Vietnam from 1802 right through until 1945. With the demise of the monarchy, the city lost all political clout to big sister Hanoi up north. Today, it almost always plays second tourist fiddle to its beguiling younger sister Hoi An — three hours’ drive south.

OK, maybe that’s over simplifying matters. But even as we arrive on the outskirts of the city, our Vietnamese tour guide proceeds to describe the people of Hue as: ‘different — they are just different’.

Watch our video of ten top things to do in Vietnam:

10 Top Things to Do in Vietnam on a First Visit | Explore Ho Chi Minh City, Hoi An, Hue, and Hanoi

First impressions are deceiving, and it may take you a while to warm to Hue’s understated charms; but give it a chance. This destination has a truly fascinating history, and an intricate cultural heritage that draws on imperial traditions of art and philosophy. You’ll find pagodas, boutique art galleries, libraries, and institutions of learning dotted across the CBD, which runs parallel to the delightfully named Perfume River.

Hue suffered heavy bombing during the Vietnam War and was also a little slow to recognise the tourism benefits of restoring its plethora of historic monuments. However, the city is slowly making up for lost time. Interestingly, our guide tells us that there are very few structures older than about two hundred years anywhere in Vietnam. Traditionally, ageing buildings have been knocked down to make way for new ones as needed.

One of Hue’s heritage highlights is the collective Royal Tombs of the Nguyen dynasty — situated several kilometres south of the city. The Nguyen emperors certainly yearned for peace and solitude in the afterlife — there’s virtually nothing out here except dense forest and the mausoleum complexes. To protect the exact burial location in each complex, those who constructed the tombs were executed for the honour.

It’s worth noting that away from the cooling breezes that come off the river, it gets stiflingly hot at the tombs. Come well equipped with sunscreen, water, and a hat. You’ll get much more out of your visit.

The other big historical drawcard in Hue (literally) is the UNESCO World Heritage-listed royal citadel, which sits directly opposite the city centre on the river’s northern bank. This vast walled complex was constructed in the early 1800s, and enclosed the imperial buildings of state and home of the royal family. Today, a large proportion of Hue’s population resides inside the walls, along with several elephants. Book a guided tour and immerse yourself fully in the citadel’s weighty past.

With a circumference of roughly ten kilometres, seeing what lies around the citadel will certainly test your shoe leather. Alternatively, pay someone to do the footwork on a cyclo tour. You’ll get to see the network of picturesque residential laneways and backstreets that fan out from the complex and are well off the beaten tourist trail. Close your eyes when traversing the larger intersections — it can get a little hairy!

Ask your cyclo driver to drop you off at La Residence at the end of the tour. Located at the southern end of the city centre, the former French colonial governor’s home has been fully restored and turned into a luxury boutique hotel. It’s another fascinating opportunity to step back in time. You don’t need to be staying at the hotel to enjoy a cocktail at the pool bar, which offers a fabulous view across the river towards the citadel.

All in all, Hue is a destination that can more than hold its own against its beautiful sisters. It’s just, well, different.

Browse our full range of Hue tours and experiences here.

Do you have any tips for top things to do in Hue? We would love to hear from you. Please leave a comment below. Hoi An Travel Guide, Tours & Things to Do, Vietnam 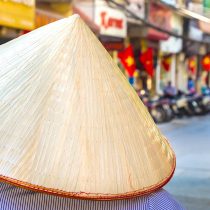 10 Top Things to Do in Vietnam on a First Visit