Darwin is a destination that can be anything you want it to be: adventurer's playground; foodie's delight; history buff's haven; nature lover's paradise. Work your way through this checklist of top things to see and do.
Nannette Holliday
Australia, Darwin, Northern Territory
Browse tours and experiences

While Darwin is one of Australia’s eight capital cities, don’t expect it to be anything like Sydney or Melbourne!

The population of the Northern Territory capital is around 120,000 — about the same as the number of crocodiles that reportedly live in the surrounding harbour. It’s more an outback country town with coastal aspects, and juxtaposes untouched extraordinary natural wonders, thousands of years of Indigenous culture, and warm weather all year round (best enjoyed in the dry season when humidity is low). There’s a fantastic array of activities on offer, but plan your stay carefully; it’s easy to miss some of the less obvious gems.

Here are ten of the best things to do in Darwin on a first visit.

Watch our video of the top things to do in Darwin:

Welcome to The Big Bus tour and travel guide’s YouTube channel. Only got a couple of days to get to know the city of Darwin in Australia’s Northern Territory…

1. Swim with a crocodile

Crocodiles are a fact of life in Australia’s Top End, and you can see both ‘freshies’ (freshwater crocodiles) and the significantly more dangerous saltwater crocodile up-close at Crocosaurus Cove in the heart of the CBD. Hold small crocodiles, feed young ones, and face your fears in the infamous Cage of Death. Being lowered into a mammoth salty’s watery home in a Perspex cylinder and watching as he sizes you up for his next meal is the closest you’ll get to these incredible animals and live to tell the tale!

Few visitors to the city are aware that Darwin was bombed by Japanese forces during World War II, not once, but 64 times from February 1942 to late November 1943. To learn more, visit the Royal Flying Doctor Service Tourist Facility at Stokes Hill Wharf. It shares the history of the RFDS, but also offers a compelling virtual reality presentation on the first attack by the Japanese on 19 February 1942.

Nearby on Kitchener Drive (behind the Waterfront Precinct), you can walk through the WWII Oil Storage Tunnels. They were built to replace the naval bunker oil tanks at Stokes Hill, which were destroyed in the first air raids.

Along the walking path that wraps around the Cenotaph in Bicentennial Park, you’ll find plaques commemorating every military unit that has served in the Northern Territory. Further down the path there’s a memorial to the USS Peary, which was destroyed on that fateful day in 1942. The monument is aligned with where the destroyer still lies at the bottom of Darwin Harbour.

3. Explore more of the city’s past

There are plenty of other intriguing, and often gut wrenching chapters of Darwin’s history to explore. A visit to the Museum and Art Gallery of the Northern Territory (MAGNT) at Bullocky Point will give you the broad backstory. Listen and learn from those who lived through Cyclone Tracy in 1974, meet the infamous Sweetheart (a five-metre crocodile that devoured the outboard motors of the local fishermen), and view a vast collection of Indigenous artefacts. Entry is free.

More of the past is on display at Parliament House, which was built on the site of the old Post Office and is often referred to as ‘the wedding cake’ (when you see it from the harbour, you’ll understand why). There’s a self-guided tour booklet available in the foyer, but I highly recommend doing the free guided tour if your travel dates line up. It runs every Wednesday morning from April to October. Book early as places are limited.

The building houses the Northern Territory Library, one wall of which is dedicated to those who lost their lives when the Post Office was destroyed by the bombing in 1942. There are many other historical documents and photographs displayed in the Main Hall.

The Chinese have played a huge role in Darwin’s history. They came to work on the initial stage of the vision for a transcontinental railway in the early 1880s, stayed for the gold rush in Pine Creek, and remained to build new lives in the Territory afterwards. Today, a Lion Dance opens the Northern Territory Parliament each February. The Chinese Temple in Woods Street was first constructed in 1887 and rebuilt in 1977 after Cyclone Tracy. It’s used for daily worship and is free to visit. Learn more about the community’s heritage at the NT Chinese Museum next door.

There are private galleries and retail outlets dotted across the CBD that showcase local Aboriginal art. Mbantua Fine Art Gallery, Mason Gallery, and Aboriginal Bush Traders at historic Lyons Cottage on The Esplanade are all well worth checking out. However, if you want to immerse yourself in the culture and traditions of our First People, consider doing a full-day tour to the fascinating Tiwi Islands.

Featured in the hit Australian movie Top End Wedding, the islands are located 80 kilometres north of Darwin (a 2.5-hour ferry ride from Cullen Bay). Interact with local artists and shop for paintings, screen-printed works, and wood carvings. You’ll even get a chance to create your own masterpiece. Lunch and a museum visit are included in the cost of the tour.

5. Make for the markets

With Darwin’s multicultural population and close proximity to Asia, markets are a key part of the city’s lifestyle. The famous Mindil Beach Sunset Markets operate every Thursday and Sunday from 4pm during the dry season (the end of April to the end of October). There are hundreds of stalls selling arts, crafts and international cuisines. Head for the beach with your choice of meal to watch the big red orb sink slowly into the azure Timor Sea.

In contrast, the Parap Village Markets — held every Saturday morning — are a ‘locals’ market’. Shop for fresh fruit and veggies, sample the wares of gourmet providores, and linger over a coffee and famous ‘Mary’s laksa’ for breakfast or brunch.

6. Splash down at the Waterfront

Darwin’s sandy beaches and tranquil harbour look inviting, but they’re home to crocodiles and stingers. Apart from your hotel swimming pool, the Waterfront Precinct is the only safe place to enjoy a splash. Body surf at the Wave Lagoon (highest wave is 1.7 metres), laze by the Recreation Lagoon pool and beach, test your skills on the watercourse, or partake in a free game of basketball or beach volleyball on the professional courts. The precinct comes complete with an array of cafes and restaurants.

7. Do a sunset cruise

The perfect way to see out any tropical Darwin day is on a sunset cruise from Stokes Hill Wharf with a glass of bubbles in hand. Fully licensed Darwin Harbour Cruises offers a buffet dinner cruise on a large tri-level boat. Opt for drinks and canapes on the two-level Spirit of Darwin catamaran, or board the smaller ketch Cape Adieu for a cruise only option. Drinks can be purchased, or BYO and pay corkage.

For something a little different, Sea Darwin runs a 90-minute cruise in a small canopied run-around. It pulls ashore at Cullen Bay to pick up fish and chips, which guests enjoy en route back to the wharf.

As night falls during the dry season, the big screen at Deckchair Cinema flickers to life with new releases, cinema classics, and foreign films. Operated by the Darwin Film Society, this popular outdoor cinema is located between the Waterfront and Esplanade, and overlooks Darwin Harbour. A light dinner and drinks are available for purchase before the main movie.

9. Feel the pedal hit the metal

Those with a need for speed will have it met on a one-hour ride around Darwin Harbour with Darwin Airboat Tours. Zip across mudflats and through coastal mangroves, spotting crocodiles, huge barramundi and myriad birdlife along the way. There are daily departures from Stokes Hill Wharf. Expect to get down and a little dirty!

You should spend at least a day (or more if you have the time) exploring further afield in the Top End. A visit to Litchfield National Park — 90 minutes’ drive from the city — offers the opportunity to swim in cool, crocodile-free swimming holes beneath plunging waterfalls. Book a guided tour from Darwin and let a local take care of the driving, while you focus on soaking up the natural splendour.

Kakadu National Park can also be done as a day trip, but it’s a significant distance from Darwin. A wetland cruise on Corroboree Billabong offers a very similar experience to Kakadu’s Yellow Water Cruise, but without the major drive. Part of the Mary River National Park, a 2.5-hour cruise through this sublime eco-system is a delight. See crocodiles aplenty, stunning scenery, and prolific birdlife — from tiny jacanas perched on lotus leaves, to large jabirus, brolgas, ibis, sea eagles, and more.

Do you have any suggestions to add to our list of the best things to do in Darwin? We would love to hear from you. Please leave a comment below.

Remember to be ‘croc-wise’ wherever you choose to swim in the Top End. Obey all safety signs and directions. Review: See the city sights on a Darwin hop on hop off bus tour Review: Litchfield tour from Darwin pairs a day in the national park with a crocodile cruise 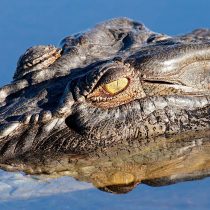 Review: Take a journey of ancient discovery on a Kakadu day tour to Ubirr from Darwin